Back then, the practitioners have created a series of movements based on their interpretation of attack and defense.

However, due to a lack of properly recorded history, which is common in the olden days and that many of the Martial Arts were simply practiced in isolation or among a small group of people, it is, therefore, an arduous task to compile a complete history for any one of the disciplines, such as Baguazhang.

However with information from Wikipedia, we are able to gather the following:The creation of Baguazhang, as a formalised martial art, is attributed to Dong Haichuan (董海川), who is said to have learned from Taoist and Buddhist masters in the mountains of rural China during the early 19th century where the evidence lying in Baguazhang’s frequent reference to core concepts central to Taoism, such as Yin and Yang theory, I Ching and Taoism’s most distinctive paradigm, the Bagua diagram.

Even though they were all students of the same teacher, their methods of training and expressions of palm techniques differed. It appeared that the Cheng and Liu styles are said to specialize in “pushing” the palms, Yin style is known for “threading” the palms, Song’s follower’s practice “Plum Flower” (梅花 Mei Hua) palm technique and Ma style palms are known as “hammers.”Some of Dong Haichuan’s students, including Cheng Tinghua, participated in the Boxer Rebellion.

In general, most Bagua exponents today practice either the Yin (尹), Cheng (程), or Liang (梁) styles, although Fan (樊), Shi (史), Liu (劉), Fu (傅), and other styles also exist. (The Liu style is a special case, in that it is rarely practiced alone, but as a complement to other styles).In addition, there are sub-styles of the above methods as well, such as the Sun (孫), Gao (高), and Jiang (姜) styles, which are sub-styles of the Cheng method. Ref Info: https://en.wikipedia.org/wiki/Baguazhang

However, there are also other beliefs that the power of the practice in Baguazhang had stemmed from ancient principles that date back two thousand years when Bodhi Dharma arrived in China from India and found the system that Shaolin Kung Fu is based on.

The history of the formation of the routine of the Baguazhang may vary from geographical location and historic points that the researcher had taken, but the benefits of the practice is widely agreed and employed upon.

Baguazhang is an internal martial arts style, in which early training focuses on the mind, where they focus on developing the connection between the state of mind and the physical moments. With the continuous development of the discipline, the practitioner will be able to develop both internal and physical strength.

It is not intended as an aesthetic performance, thus the requirements of jumps are relatively low.It is suitable for practitioners who are keen to focus on developing internal strength, whole-body muscles, self-cultivation, and an improvement in health.

Bagua Zhang is a famous form of martial art in China, it is also one of the internal martial arts alongside the famous Xingyi Quan and Taiji Quan. Founded in the Qing Dynasty by Grandmaster Dong Haichua, Bagua Zhang strongly emphasises the usage of palms and active footwork.

The system is based on the ancient oriental philosophy of I Ching (aka Book of Changes). Bagua Zhang practitioners are taught to regulate their breathings during trainings. The art is excellent for selfdefence, cultivate health and performance.The practice of circle walking, or “turning the circle”, as it is sometimes called, is Baguazhang’s characteristic method of stance and movement training.

All forms of Baguazhang utilize circle walking as an integral part of training and it encourages the QI to move in circulation. Practitioners walk around the edge of the circle in various low stances, facing the center, and periodically change direction as they execute forms.As for the training, for a beginner, the circle is six to twelve feet in diameter.

The learners will first learn flexibility and proper body alignment through the basic exercises, as this is a consistent learning , the learners will be able to master to a good level and then move on to more complex forms and internal power mechanics. Although the internal aspects of Baguazhang are similar to those of Xingyiquan and Taijiquan, they are distinct in nature.

The different Martial Arts form are intertwined but yet difference in their emphasis.Interested in Baguazhang? Contact us for details or enrollment in our classes by filling in the form below. 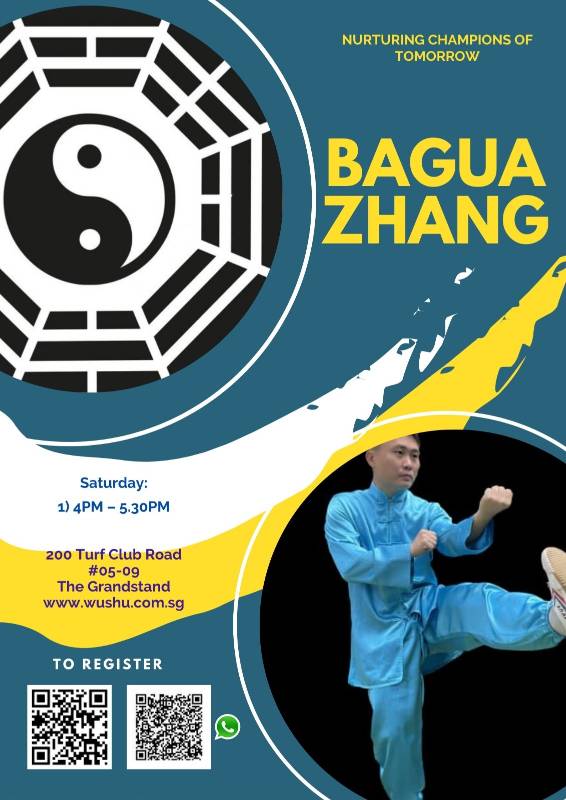 We conduct many different Wushu Classes for all ages in Singapore that includes the Wushu Training for beginners, Tai Chi for Beginners & Elderly, Wushu Enrichment Classes, Wing Chun & TongBeiQuan.

Submit a quick enquiry below or contact us to learn more.

Our Wushu Specialist will contact you asap to assist.